Our role is not to save individual charities but we did want to explore the sector’s resilience to financial distress, and discover if there were any key lessons to help charities manage difficulties better. As such, we undertook a proactive strand of work to look into just these issues.

What are the main causes of financial distress?

As you can see from the diagram below most of the charities we looked at were affected by changes outside of their control, such as expiry or withdrawal of grants from local and central government agencies, or the impact that the wider economic climate has had on income. This is perhaps not surprising. 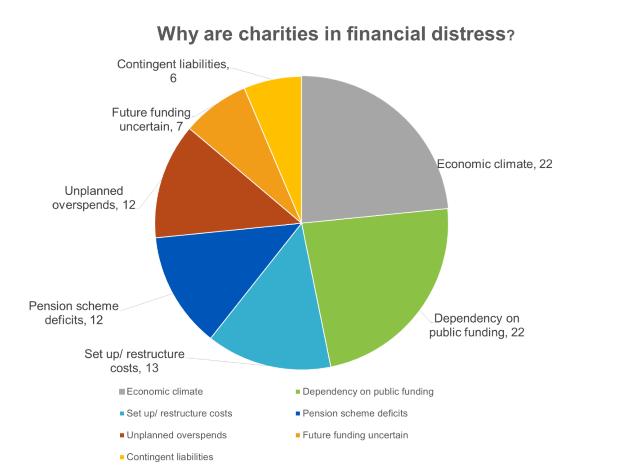 What made the difference to how the charities got through these difficulties?

However, the way trustees dealt with these difficulties was within their control and the results varied. The analysis showed the importance of trustees being alert to risk factors and recognising where changes to funding could have an impact on their sustainability. It brought into focus the importance of trustees managing financial difficulties well and being alert to risks, particularly against a backdrop of changes to funding within the sector.

Those trustees that put all the charity’s eggs in one basket, banking on that one golden egg, put themselves at risk with, for some, inevitable consequences. However those that acknowledged they were at risk and explored different options, at an early stage, achieved much better outcomes.

Trustees shouldn’t just spot the opportunities of applying for new funding, for example, but also plan for the consequences if they are not successful and what their next steps might be.

Some might think this sounds like a negative approach, but I would argue it is quite the opposite. A plan A, B, C and D gives trustees options. The problems arose where these were lacking and trustees didn’t spot the risk indicators and the problems until it was too late.

Those charities that reacted sooner, making tough decisions such as reducing spending plans, downsizing, disposing of property assets or seeking alternative revenue sources, were found to be better able to manage themselves out of financial difficulty. Sometimes, that involved collaborating and mergers with others.

Some would consider that a merger amounts to failure, but for those we engaged with it was a pragmatic, responsible course of action that was in their best interests to ensure the charity’s objectives could continue for its beneficiaries. There is no easy answer to the difficulties that charities are facing. However, a head in the sand approach is a dangerous one.

What are we doing next?

We recognise that we too have a role to play here to ensure trustees have the skills and information to tackle these problems head on. So over the coming months we’ll be working with a number of charities and technical experts to improve our guidance and speak more about our findings. More on that soon.

In the meantime, the reports can be read here. And why not consider the '15 key questions trustees should ask’ at your next Board meeting.